Originally from Wheaton, Mark grew up in Olney having moved there with his family in second grade. While in JROTC, he served as a Platoon, and Company Armorer, on the Drill Team for 4 Yrs., with one year as the Asst. Team Leader, and simultaneously on the Color Guard for two and a half Yrs. Most of his “JROTC career” Mark served as an NCO.

“My favorite position in ROTC was as an E-7 Platoon Sergeant, NCOs have always been the core of the military, they are where leadership happens… Down in the dirt and grime, with the Joes!”

His senior year, LTC Whiteside promoted Mark to 2nd LT, and assigned him as a Platoon Leader. Mark reluctantly accepted the officer’s position, but his heart was serving as an NCO.

“In all the positions I’ve held in the fire service and my career, I’ve applied what I learned as a cadet in ROTC. The program taught me Humility, Sense of Community, Dedication, Persistence, and of course Leadership!”

Since 2004, Mark has worked with the Bureau of Alcohol, Tobacco, and Firearms. He currently serves as the Seized Property Custodian for the Washington Field Division. He resides in Damascus with his family. 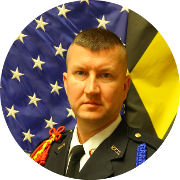